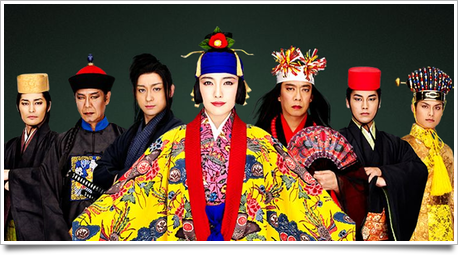 Pictured is the cast for the stage play of “Tempest” starring Yukie Nakama in the main role of Mazuru/Neion Son (真鶴・孫寧温). The play, based on the novel by Naha-born author Eiichi Ikegami, will become a 10-episode BS period drama (BS時代劇) on NHK that is projected to start airing in July 2011.

Synopsis of the stage play from Tokyograph:
“The Tempest” is based on a 2008 bestselling novel by writer Eiichi Ikegami. The story takes place in the late 19th century, during the reign of the Ryukyu Kingdom. Nakama plays a young woman who, for the sake of her country, poses as a eunuch to become an elite bureaucrat, while also dealing with problems as a woman. This is her first time having to play both a male and female character. Her supporting cast includes Yamamoto as her lover and Namase as her enemy.

For the TV drama, the role played by Yamamoto (Masahiro Asakura) will go to actor Shousuke Tanihara and Namase’s part (Ookimi Kikoe) will be played by actress Saki Takaoka.

(Below is the CM from the stage play.)

Although the majority of the cast from the drama (and stage play) are not from Okinawa, Yukie will be joined by fellow Uchinanchu Gackt and upcoming actress Ayaka Tasaki who plays the younger Mazuru. Images from the NHK drama can be viewed on the Walker plus site.

Still finding my way. View all posts by Haisai Richie