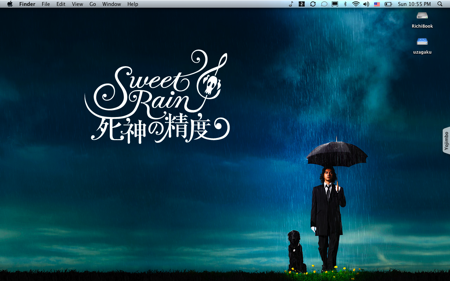 Gosh, it’s seems like ages since I last saw Takeshi Kaneshiro in a Japanese film. It think it was 2002’s “Returner.” This time around, Takeshi plays a shinigami (death god) in a film called “Sweet Rain: Shinigami no Seido” that’s about to begin its road show on March 22nd. From the looks of the trailer, it looks to be a pretty interesting movie. To download the wallpaper for your Mac/PC, click on the download (ダウンロード) link at the top of the movie site’s navigation menu. The song from the movie, “Sunny Days” (Manami Konishi’s CD debut under her character’s name, Kazue Fujiki) sounds pretty sweet (pun intended) too. Anyone else getting this? The film is about a death god yet the title of the film has the word sweet in it and the song from the film has the word sunny in it. Let’s not expect a happy-ending for this movie.