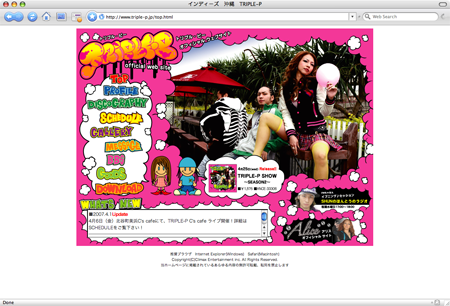 One of the many indies music artists (I’ll blog about the others in the coming weeks) that caught my attention this past March in Okinawa is the hip-pop (hip-hop, rap, J-pop) duo TRIPLE-P. The duo of SHUN and Alice is on the same indie record label as the popular mixture band HY, Climax Entertainment Inc., and I can see them potentially making their major label debut (i.e., if that’s the direction they wish to go) this year. With four singles (starting with 2005’s “Yume”) and two EPs (the second one, “TRIPLE-P SHOW∼SEASON2∼”, to be released on 4/25/07) in their discography, they certainly have enough material to carry over to the mainstream but it’s the duo’s live show (although sadly, I was only able to see clips of it on the tube) that rocks with Alice looking like Japan’s version of Fergie from the Black Eyed Peas (not surprisingly, her online profile lists the group as one of her favorites).

TRIPLE-P’s music can be sampled on their website where they also have video clips of a few of their songs too (check out the ballad “Love Song”). You can also sample and purchase their music on iTunes Japan (clicking on the link will open iTunes) if you have a credit card with a Japanese billing address or an iTunes Japan gift card. The duo’s first EP, December 2006’s “TRIPLE-P SHOW∼SEASON1∼”, can be purchased through online retailer — and one of my personal favorites — CDJapan.co.jp.